The Great Barrier Reef (GBR) is one of the seven wonders of the natural world and was declared a World Heritage area in 1981. The reef is scattered with beautiful islands and pristine coral quays and covers more than 300,000 square kilometres. It consists of more than 3,000 individual reefs which range in size from 1 hectare to over 10,000 hectares. There are more than 600 islands.

This amazing ecosystem is home to a myriad of colourful creatures, all sizes great and small. From tiny nudibranchs, to whales, turtles and more.

As one of the FIRST holders of certified Advanced Ecotourism, Wavelength are one of Australia’s leading ecotourism businesses. 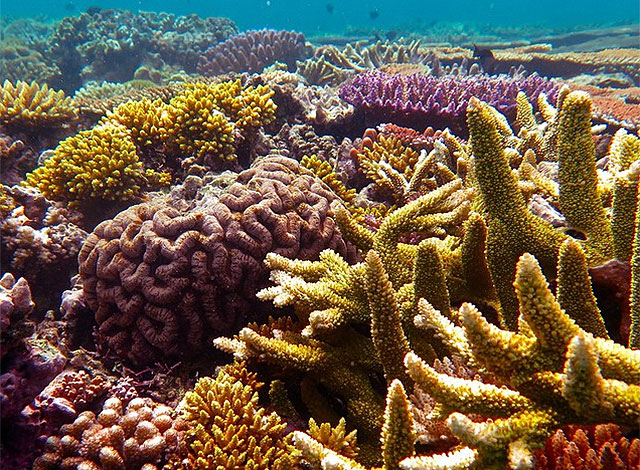 Visibility on the Reef

The average visibility in the northern sector of the GBR is 15 metres. Visibility of 20-25 metres can be experienced on the outer reef. Visibility depends on a number of factors including the season, currents, wind, swell and tides.

As marine biologists, we’re passionate about sharing this amazing marine environment and its flora and fauna with you. On this site we take a closer look at Maori Wrasse, Turtles, Whales and Clownfish.

We strongly believe in trying to represent the best practices for ecologically sustainable tourism, and on providing a personal experience of nature in ways that lead to greater understanding and appreciation.

Wavelength has free spaces available to help researchers to access the outer reef for field studies. If you are a researcher and wish to inquire about the feasibility of a particular project contact us.

Corals make up the various reefs and cays and are the basis for the immense diversity of sea and animal life. Most reef building coral consists of colonies of individual coral polyps, tiny simple creatures which clone themselves into vast communities which are usually anchored to the sea floor. Each polyp produces a skeleton of calcium carbonate which forms the hard structure we recognise as coral. Together, these colonies create the underwater forests we refer to as coral reefs. The perfect environment for coral is shallow warm water where there’s considerable tidal movement, plenty of light, and where the water enjoys stable salinity and is low in nutrients.

There is a huge variety and diversity of coral species; some grow very slowly and may live to be thousands of years old, others grow much more quickly and have lifespans that fit between the regular cyclones that occur on Australia’s north east coast. The colours of coral are created by algae called zooxanthellae, and by the protective chemistry that shields the coral from their algal partner’s toxic by-products. Only live coral is brightly coloured, while dead coral is grey and stone-like in appearance and often covered in encrusting sponges and algae. 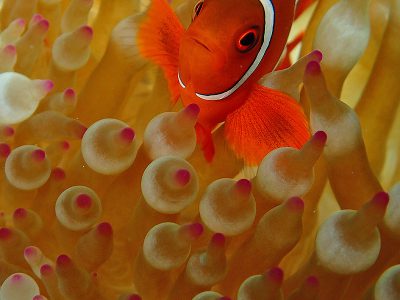 A significant threat to the GBR is coral bleaching. This phenomenon is not exclusive to Queensland’s reefs. It’s been observed on reefs throughout the world, including very badly in the Indian Ocean in 1998, the strongest El Nino year on record. That event is estimated to have caused huge loss of coral worldwide with up to 90% loss in places like the Maldives, although the reefs affected have partially recovered.

Scientists believe that coral bleaching can be attributed to significant rises in water temperature, made worse by global warming. Bleaching is the result of coral polyps evicting their algal partners as they become overactive and therefore more toxic, overwhelming the protective chemistry mentioned above. The first evidence of this is the loss of colour in the coral tissue, revealing the white skeleton below. Death of the colony soon follows in severe cases. Contamination of seawater by agricultural chemicals like fertiliser and pesticides makes it harder for corals to recover. 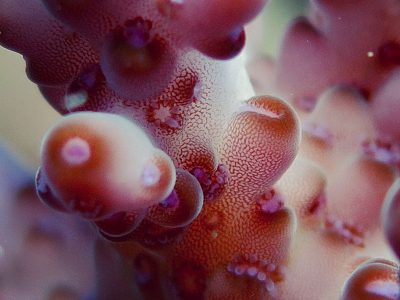 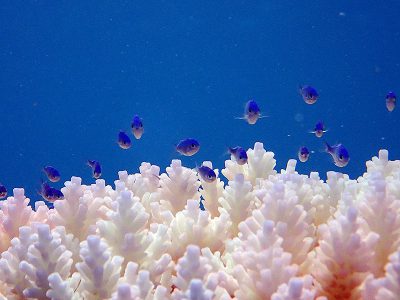 Another threat, ocean acidification, is often referred to as “the other carbon problem” and arises as carbon dioxide is absorbed by sea water where it forms carbonic acid. As the sea becomes more acidic, many organisms loose their ability to produce their calcium carbonate skeletons. The structurally weakened organisms are more brittle and prone to damage. Eventually, it is predicted, the erosive force of the ocean will outpace the constructive capacity of the reef leading to the ultimate demise of this enormously important system. The animals that may well thrive in these conditions will be the gelatinous ones – jellyfish.

Wavelength is privileged to have access to one of the world’s greatest natural areas. Just on our doorstep is the greatest collection of coral reefs on earth and it is still beautiful. People come from all parts of the world to marvel at the beauty and we hope to show them why it’s worth protecting.

90% of the reef’s diversity occurs in the top 4 metres of water, so you can see most of what you would ever want to see by snorkelling. Our highly trained crew will teach the simple techniques of snorkelling, with special attention to the beginners and advice on advanced skills for the more experienced. Wavelength offers a self-paced tour with the opportunity for interaction with both marine life and a marine biologist on the guided snorkel tour.

The rapid expansion of tourism, and other commercial operations, in the Great Barrier Reef Marine Park in the last decade has given a new urgency to research and education programs. Information is needed to guarantee the survival and conservation of the world’s largest marine park and World Heritage Area. Thus an Environmental Management Charge (EMC) has been introduced by the Great Barrier Reef Marine Park Authority (GBRMPA) for visitors to the GBR and industries operating within the World Heritage Area.

Currently the EMC is $7.00 per person and it’s the duty of all reef operators to collect it either as part of the tour rate or separately onboard. All funds raised by the EMC are used by the GBRMPA for research, education and marine park management. The money raised is about 20% of the GBRMPA budget, with the rest coming from the government. 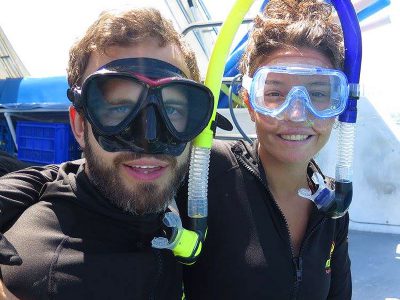 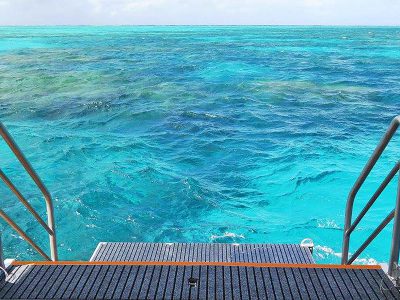 As the inner reef is closer to the coast there is generally more sediment in the water which is caused by the run-off from mainland rivers and streams. These sediments decrease the visibility underwater and also limit the amount of sunlight that filters through the water. Coral needs sunlight in order to survive and grow. So the more sunlight that can penetrate the water the larger and faster corals will grow.

Although the inner reef has many beautiful corals, mainly of the softer variety, it can’t compare to the outer reef, which due to its distance from the mainland, has less suspended sediments so more sunlight can penetrate the water. This means the outer reef has a greater diversity and abundance of coral and fish life compared to the inner reef.

The outer reef is simply spectacular.

Jellyfish (or stingers) occur in all tropical waters and thanks to research efforts, GBR operators have a lot of information on which to base their activities and ensure the safety of their passengers. We know that from approximately October to May the most lethal species of box jellyfish live in estuaries and coastal waters along the Far North Queensland coast. Some jellyfish, such as Irukandji, reproduce in the estuaries and can be washed out with the rains of wet season and, whilst mostly found along the coast, they can occasionally be found at the outer reef.

There are species of jellyfish, including oceanic and offshore species of Irukandji, which if encountered can cause serious health issues and in extreme instances, fatality. These occur in all tropical snorkelling and diving locations throughout the world, including Hawaii, Florida, the Caribbean, Thailand, Fiji and Indonesia, especially during the warmer seasons. From October to May, we advise the wearing of full body coverage using lycra suits and/or wetsuits to minimise the already low possibility of jellyfish stings. Wavelength provides lycra suits free of charge from October to May.

If you come across a shark on the GBR it is generally a white tip reef shark which is non-aggressive and rather shy. Larger sharks such as tigers and whalers which have been known to attack humans are rarely seen and are generally cautious of people. 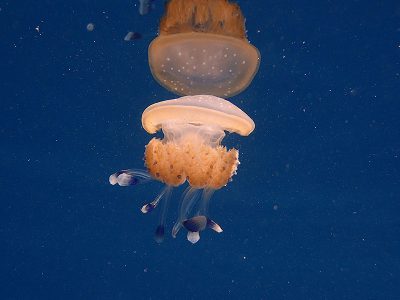 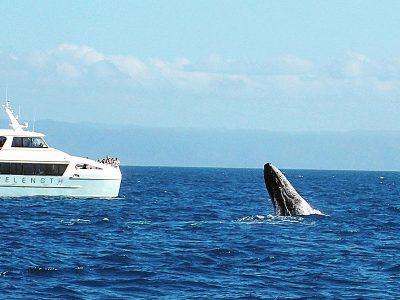 Coral spawning is sometimes called “sex on the reef” as this is the time that corals release their eggs and sperm simultaneously. Some describe it as an upside-down snow storm in slow motion and it’s an impressive sight. It usually happens 4 nights after the full moon in November. A lot of critters are active at this time as the coral spawn provides a smorgasbord feast for marine dwelling creatures.

The great migration: Each winter and spring you will see individuals or pods of humpback and minke whales making their way through the waters of the GBR. These majestic creatures spend their winters in tropical waters and may grow to more than 15 metres. With their huge tail flukes they make an impressive display. Other friendly marine mammals are spinner and bottlenose dolphins who we often see riding our bow waves.

The GBRMPA is the principal adviser to the Commonwealth Government on the care and development of the marine park. It is the main aim of GBRMPA to ensure the protection, wise use, understanding and enjoyment of the GBR in perpetuity through the care and development of the park. Wavelength Reef Cruises works within the guidelines and permit regulations as set by GBRMPA to ensure the GBR can be seen and used by future generations. For more information on GBRMPA, and the management of tourism on the reef, please visit the GBRMPA website.

Total freedom to swim at your own pace. Go where you want, when you want. All Equipment Included

Wavelength are passionate about the Great Barrier Reef, its protection and conservation. If you’d like to find out more about the reef and some of its caretakers, visit our links page for more information.

We firmly believe that we must protect this incredible natural wonder so that future generations can experience and benefit from the beauty of the Great Barrier Reef as we do today.

The global bleaching event must be taken seriously as the strongest possible reminder that we have to reduce fossil fuel use faster, and we have to develop and implement the technology of the clean energy revolution faster.

Visiting the reef is still a fantastic experience and tourism contributes to the economic case to protect it, as well as making for a better informed public when it’s seen in person.